Over the months leading to our annual Design-Build Conference & Expo, hosted this year in Denver Colorado from November 2-4, we will be posting weekly projects that have earned the distinction as a 2015 DBIA Merit Award winner. These projects, at a minimum, resulted in highly successful delivery and achieved best value while meeting design and construction quality, cost and schedule goals. These projects will also be highlighted during the Design-Build Conference & Expo on November 3 during an Awards Reception. Please join us by registering for the conference here.  This week we recognize the winners from our Rehabilitation, Renovation and/or Restoration Category and Commercial/ Office Buildings Category.

The plans for Nutrabolt’s new corporate headquarters included two buildings: a 30,000-square-foot office building and a 20,000-square-foot employee fitness facility. The integrated design-build team worked collaboratively to create the facility that would reflect Nutrabolt’s culture. The Nutrabolt new headquarters creates a stimulating and playful work environment embodying the company’s “work hard, play hard” culture. Meeting rooms and private offices are grouped into a series of discrete “boxes,” each clad in one of five materials: stone, wood, metal, stucco or board-formed concrete. The informal plan arrangement of boxes around a central courtyard yields a network of connected open office areas and lounge spaces that promote collaboration and communication between departments. The full-height glass walls extending between boxes flood the interior with natural light and strengthen the connection to the outdoor spaces. Generous lounge areas, cafe, relaxation rooms and fitness center, including a full basketball court and spa, allow Nutrabolt employees to play as hard as they work. 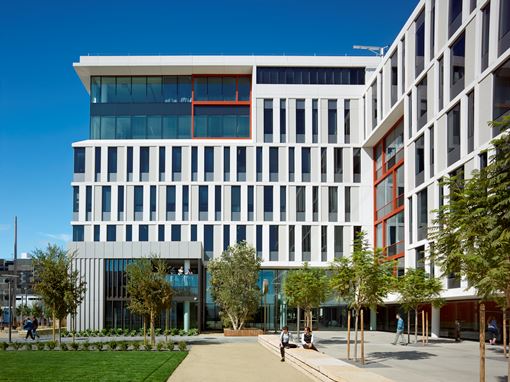 UCSF chose design-build because of the 24-month timetable for design and construction of their facility. The ultimate plan emulated how UCSF wanted the building to function, feel, and perform while providing the design-build team latitude to be highly creative and meet the cost and schedule challenges. One example of meeting both a budget and schedule challenge was the exterior skin system. The glass skin system was prefabricated offsite into 30’ x 12’8” panel frames (one bay wide and one floor tall). These frames were delivered onsite and erected right off the trucks with the project tower crane. It took only three weeks to erect and enclose the entire building envelope. Prefabricating and panelizing the skin saved approximately 15% of the total exterior skin system cost and saved approximately two months on the project schedule.

Through the 264,000-square-foot Mission Hall: Global Health & Clinical Sciences Building, UCSF wanted to create a new hub for its growing Mission Bay campus. Mission Hall needed to consolidate the location of several departments working in leased spaces throughout San Francisco and forge a link between academic, research and medical sectors. UCSF developed a novel approach to project delivery that centered on a performance and criteria-based design-build competition model. The criteria included an array of aspirational and technical objectives to be delivered within a very limited budget and an intensely challenging 24-month design and construction schedule, which included an intense 10-week design-build competition phase. Success depended on forming a design-build team with a high degree of trust and a shared perspective on collaboration and project delivery. UCSF paid a stipend of $200,000 to all three project teams that participated in the competition phase. UCSF Technical Criteria include: an academic office building that would perform for 50 years and the building needed to be immediately occupied after a seismic event per ASEC41; and a building that would bridge the academic campus with the new medical campus (a shift in UCSF’s master plan).

Because the project was equal parts structural retrofit, historic restoration and complete tenant improvement, design-build offered the optimal solution for all stakeholders. The team held multiple work sessions with individual user groups to capture their specific requirements. Those requirements were then vetted and priced to provide a complete financial picture to the owner. Furthermore, as an historic restoration, seven months into the schedule Clark discovered that all of the steel frame members, which were encapsulated in concrete fireproofing, were coated in lead-based paint. This finding and resultant effort required Clark to establish new protocols for not just working in a hazardous environment, but for the extensive cleaning and testing of those areas before non-lead impactful activities could commence. However, due to effective collaboration and adjusting of schedules, the project was still completed on time.

For seven decades, the Hall of Justice was a significant piece of American judicial history. Originally constructed in 1925, the building was home to the Los Angeles County Sheriff’s Department, Coroner’s Office, County jail and dozens of courtrooms. The ornate building was damaged during the 1994 Northridge Earthquake and deemed structurally unsound for continued occupation. For 20 years, the Hall of Justice sat dormant, falling deeper into disrepair. Los Angeles County sought to re-open the building, an effort that would require a structural retrofit, historic restoration and complete tenant improvement. A team led by Clark Construction Group was awarded a design-build contract to repair and restore the Hall of Justice and, in just three years, delivered a modern, functional facility that retained the building’s historic elements. The Hall of Justice is a unique and intricate building that enhances Los Angeles’ downtown skyline. This restored facility serves, once again, as the headquarters for the LA County Sheriff’s Department as well as the District Attorney’s office.

The design-build renovation of Old Main maximized cost-effective rehabilitation balanced with preservation of historical integrity and new programmatic functions on a fast-tracked schedule. Due to the project’s evolving nature, the owner’s original budget was established without a defined program. The design-build team’s first task was to allocate the budget through a cost model respective of historic renovations and new improvements. The cost model was used to manage the design through weekly meetings that developed design inclusions within an established budget. A prioritized “wish list” was created that guided the team’s incorporation of additional project scope as unforeseeable conditions became defined. This interactive “design to budget” process ultimately allowed incorporation of site hardscape and landscape improvements that were originally thought unachievable within the original budget.

Old Main was the first building on The University of Arizona campus, opening in 1891. It is also the second oldest operational building in the state. Over its preceding 123-year history, Old Main has gone through numerous remodeling projects that significantly altered its interior, but little had been done to the building’s exterior. The project’s scope of work included rehabilitating deteriorated building elements to extend the building’s life, and restoring the second-floor interior to its original character, accommodating new functional uses. This fusion of good preservation practice and adaptive reuse required a delicate balance between budget management and the needs of a sophisticated user group as Old Main was transformed to the new offices of the university president and her staff.