Over the months leading to our annual Design-Build Conference & Expo, hosted this year in Denver Colorado from November 2-4, we will be posting weekly projects that have earned the distinction as a 2015 DBIA Merit Award winner. These projects, at a minimum, resulted in highly successful delivery and achieved best value while meeting design and construction quality, cost and schedule goals. These projects will also be highlighted during the Design-Build Conference & Expo on November 3 during an Awards Reception. Please join us by registering for the conference here.  This week we recognize the winners from our Transportation Category.

As the team studied the overall project schedule, it was apparent that this project would benefit by designing the project as one package rather than dividing the project into sections. Immediately, the design-build project manager and Design Manager developed a design submission schedule based on the construction start date. The overall schedule was aggressive and all team members were advised of the schedule to avoid lack of understanding of expectations.

By briefly shifting vehicles to the opposite side of the road, the design of this innovative Diverging Diamond Interchange (DDI) eliminated traditional left turns that must cross oncoming traffic. The original concept created “trap” lanes on Route 15 for traffic exiting from I-64 off ramps, which created a weave that would have been difficult to navigate. The design-build team’s concept eliminated the trap lanes and undesirable weaves and included a study of interchange movements prior to the bid. This reconfiguration eliminated the need to replace an existing signal and raised medians that were in the Request for Proposal. This ultimately improved safety by eliminating a potential obstruction to traffic, easing maintenance – especially during snow removal – and alleviating confusion on the I-64 off-ramps.

The I-485 Outer Loop of Charlotte, North Carolina, is one of the state’s most vital urban loops, linking I-77 to I-85 as well as several major arterials. The modification of the existing I-485/I-85 interchange into a fully-directional interchange has long been viewed as the final link needed to help make the Outer Loop a safer and more accessible roadway network for the upwards of 180,000 motorists who are projected to use the loop by 2035. In 2010, the North Carolina Department of Transportation (NCDOT) initiated a design-build-finance advertisement for teams to submit qualifications followed by technical cost proposals. The project’s scope included the reconstruction of the existing I-485/I-85 interchange into a fully directional four-legged interchange that would also connect with the newly constructed I-485 to the north. Two adjacent projects, the widening of I-85 to the northeast and the new alignment construction of I-485 to the northwest, were under design-build development concurrently and necessitated extensive coordination to make the precise geometric connections between the three projects. 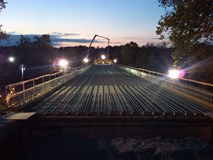 The key challenge to meeting the project’s goals was logistics. The high volume of bridges to be replaced across such a large geographic area (the average distance between bridges was 11 miles) created challenges not only in coordinating the design process with the overall schedule, but also in materials handling and construction scheduling. The design-build model not only reduced the project price, but also allowed MoDOT to minimize public inconvenience by accelerating construction and limiting bridge closures to just 42 days, on average – half the time of a normal bridge replacement. KTU’s design and plan standardization, design process optimization, and accelerated bridge construction components allowed KTU to complete the overall project 23 months ahead of the owner’s original schedule and under budget.

The Safe & Sound Design-Build – MoDOT 554 (MoDOT 554) project was a $503.5-million design-build contract to replace 554 bridges across the state of Missouri. The bridges were located in 111 counties throughout Missouri, across 69,700 square miles and varied from remote, rural areas to sprawling urban cities. The prime contractor was KTU Constructors (KTU), a joint venture of Kiewit Western Co., Traylor Brothers Inc. and United Constructors Inc. Design work was subcontracted to HNTB and the LPA Group — a division of Michael Baker Jr. Corp.).