Midwestern Expansion: Design-Build in the Heartland

The Midwest is the heart of the United States. Home to rolling prairies and cities of industry, Minnesota hotdishes and the farm where I grew up. I have lived on the east coast for many years now, but the Midwest will always feel like home. For that reason, I always look forward to returning to the Midwest as I did a couple weeks ago for the meeting of the Mid-America Association of State Transportation Officials (MAASTO) in Indianapolis. These events are where we at DBIA begin to lay the groundwork for legislative success.

Design-build authority has spread rapidly across the United States since DBIA was founded more than 20 years ago, but especially in the last 10 years. The largest pocket of resistance, however, has been the Midwest where Wisconsin, Iowa and North Dakota still have severe limitations on design-build authority. Design-build is also limited for transportation projects in Indiana, Illinois, Kansas and Nebraska.

The periphery of the region has seen success, with Minnesota serving as a design-build leader, and Michigan, Ohio and Kentucky have followed. When Minnesota’s I-35W bridge famously collapsed in 2007, the state used the design-build delivery method to replace it in less than a year, opening it to traffic three months ahead of schedule. We were able to use the success of that and other projects to push the Ohio and Michigan legislatures to approve broad design-build authority, and we’ve been making progress in Illinois and Indiana as well (expanding design-build authority a little more each year in those states). A growing interest in Public-Private Partnerships is also pushing the region towards design-build. 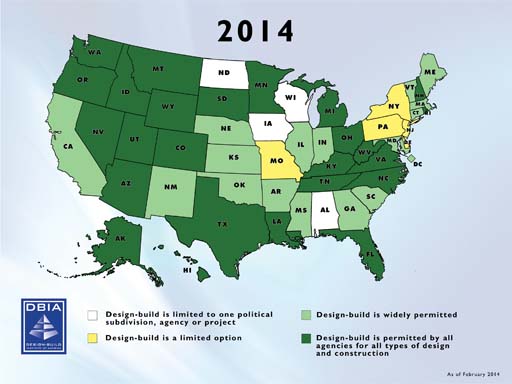 I find the resistance to design-build in the Midwest most often comes from highway contractors. Many of them fear the unknown and feel unsure if they can make that transition to design-build. Others have bought into the myth that design-build will lead to big out of state companies coming into town and snapping up all the work, taking jobs away from them. Though there is no evidence to support this myth, myth busting is often a long, slow and arduous process. Ironically, I often hear horror stories from subcontractors who suffer on design-bid-build projects. Both in-state and out of state contactors will come into design-bid-build projects with ridiculously low bids in order to win the project, then force their sub-contractors (which are often local) to lower their costs so they can meet the low-bid they offered. On design-build projects, this busting of sub-contractors is much less likely to happen since the design-build team is chosen based on best value.

I’m working with DBIA’s Mid America region to destroy this myth and put together a coalition to pass legislation throughout the region, starting in Iowa and Missouri. Before legislative sessions start next January, we’re going to hold numerous educational events and meetings in the region to demonstrate the advantages states across the country are experiencing from design-build project delivery. We’ll also be assembling a coalition of owner and industry groups to push legislation that expands design-build authority in the transportation sector as well as for local governments.

You usually hear when we help pass legislation, but the work that goes into it is developing now. I believe this often untold stage is the most important story. I enjoyed seeing old friends and meeting new ones at the MAASTO meeting, and now we can work together to begin planning for what will hopefully be another historic year for design-build project delivery.