It’s easy to be cynical when our elected leaders promise infrastructure investment is a “top priority.” Americans have heard that from the campaign trail, halls of Congress and White House Rose Garden for decades. Meanwhile, our roads, bridges, water infrastructure and much more are crumbling with no new infrastructure revenue streams approved by Congress since 1993.

Could yesterday’s meeting between congressional Democrats and the president be the beginning of something new?

“…top congressional Democrats say that they and President Trump have agreed to pursue a “big and bold” bill providing $2 trillion over multiple years for highways, water projects and other infrastructure. But they didn’t immediately come up with a way to fund the ambitious package.” ENR 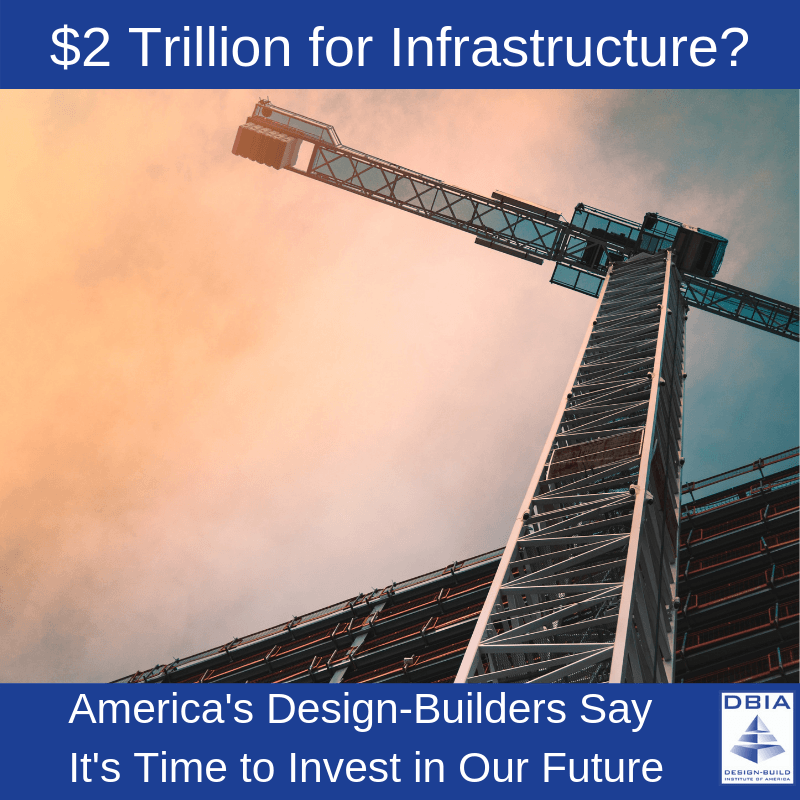 So, while the price tag is definitely new, at $2 trillion in new investment versus the $200 billion the White House proposed last year, the fundamental and very real challenge of how to pay for it remains. Politico offers this analysis:

“It took dozens of short-term extensions and a large array of budget gimmicks for Congress to reauthorize funding for roads, transit and bridges the last time a five-year, $305 billion transportation bill came before lawmakers in 2015, a feat they will have to repeat in the next 17 months before that legislation expires. Even to maintain the status quo, lawmakers will have to find additional money somewhere because of the continued erosion of the buying power of the federal gasoline tax.”

Organizations representing the architectural, engineering and construction industry are unanimous in their support to find the funding needed to rebuild our failing infrastructure.

“For decades now we’ve seen that promises don’t pave roads. However, whenever political leaders from both parties sit down and actually talk about the real challenges facing American infrastructure, even the most cynical of us have to hope that our nation’s needs can prevail over politics. Design-builders know how to deliver the most cost and time-efficient projects in the nation and we’re ready to help Washington convert any new federal infrastructure dollars into innovative projects.”…Lisa Washington, DBIA Executive Director/CEO

“Congress and the administration need to act quickly to convert this bipartisan agreement into a comprehensive measure that will fund significant upgrades to our aging and over-burdened infrastructure.”…Stephen Sandherr, Associated General Contractors of America president and CEO

“The foundational pillar of any long-term infrastructure package is a sustainable, growing, user-fee based revenue stream for the Highway Trust Fund. It remains the linchpin for any final and meaningful deal between the Trump administration and Congress.”…Dave Bauer, American Road & Transportation Builders Association president and chief executive officer