Infrastructure investment is one of the few issues in this politically divisive era which garners wide support across parties, regions and states, yet we can’t pave streets with promises. Americans in cities and rural areas, no matter their political persuasion, understand that our nation’s bridges and roads, airports and public transit, water and sewer pipes – which serve as a bedrock of our economy — are in desperate need of improvement. Study after study has shown that much of our nation’s infrastructure is either structurally deficient, functionally obsolete or both. Despite rare bipartisan agreement and recognition of the problem, there are no easy answers for how to solve a problem that’s been decades in the making. The most fundamental question is “how do we pay for it?”

The Design-Build Institute of America is proud to participate in Infrastructure Week 2017 because we firmly believe this year’s slogan: Across America it’s Time to Build. Design-builders are already acting on that call to action from cities and states looking for ways to maximize their limited project dollars. It’s no surprise design-build continues to grow as design-build projects, large and small, and across sectors continue to deliver both cost and time savings. In 2017, we’ve already seen important legislative victories in 10 states with many more design-build, P3 and alternative delivery bills still being debated in state legislatures nationwide. This year’s design-build successes follow last year’s historic design-build year in which state legislatures passed the vast majority of the largest number of design-build bills introduced (124) since DBIA has been tracking legislation.

Design-build isn’t new and it’s not radical; in fact, it’s allowed in some way in all 50 states. However, alternative delivery methods like design-build do require public owners (like cities, states and the federal government) to provide flexibility in the procurement process allowing designers and builders to collaborate earlier in the process, creating projects which allocate risks more efficiently and improving delivery time and budget. As the use of design-build continues to expand, more public owners are finding the innovation and collaboration of design-build projects stretches their limited public funds by consistently delivering time and cost benefits. Research shows design-build has proven to be faster and more cost-effective, resulting in fewer changes, fewer claims and less litigation. Design-build is one of the fastest growing sectors in the building industry and will play a growing role in the infrastructure renaissance already underway in many states.

The design-build industry, representing a broad array of professionals including; architects, builders, engineers, legal and finance experts, owners and more, knows what it takes to deliver on the promise of building a better America. We’ve been doing it for decades. We will continue to work with state legislatures to expand design-build authority and maximize their infrastructure dollars; however, the states can’t do it alone. Closing our country’s trillion-dollar infrastructure investment gap demands a strong federal partner to fund large and transformative projects. Congress needs to make the commitment to rebuild our nation’s infrastructure. America’s design-build industry stands ready to deliver today and in the future on desperately needed national infrastructure investment because we know that Across America it’s Time to Build. 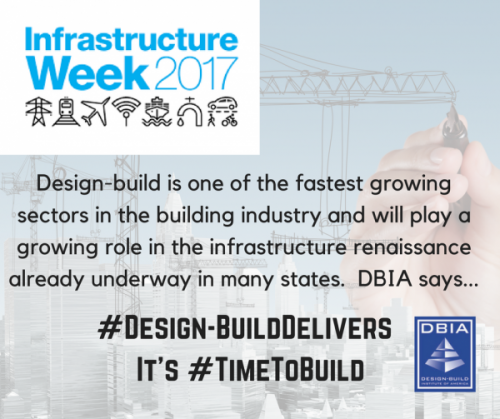