Last year, he used the State of the Union speech to ask Congress “to produce a bill that generates at least $1.5 trillion for the new infrastructure investment we need,” where “every federal dollar should be leveraged by partnering with State and local governments and, where appropriate, tapping into private sector investment — to permanently fix the infrastructure deficit.” The White House issued a blueprint in February, proposing to commit $200 billion in federal money (all offset by budget cuts) to spur larger investment. (via Politico)

But this plan never turned into legislation, leading to comments from the President last night.

He added, “I know that the Congress is eager to pass an infrastructure bill—and I am eager to work with you on legislation to deliver new and important infrastructure investment, including investments in the cutting-edge industries of the future.” (via ENR)

Politico also noted the role a Democratic House will play in the passage of this legislation, writing that “in this Congress, his administration’s efforts on infrastructure will be met by a Democratic House that is planning to approach the issue very differently, led by [Rep. Peter] DeFazio, with sights set on a package with a heftier federal investment and a significant focus on adapting to climate change.”

“In this politically divisive era, there are few issues which garner as wide support across parties, regions and states as infrastructure investment. However, even that support has not yielded much more than promises. We can’t pave streets with promises.

The president has, once again, expressed his support for an infrastructure package and we urge Congress to seize the moment and begin the hard work of finding the funding to make it happen. A true infrastructure renaissance means America needs to build better, using innovation and collaboration to deliver resilient and efficient projects, while maximizing limited dollars. That’s why design-build is now the fastest growing delivery method in the nation. Many states simply aren’t waiting for Washington and they’ve turned to design-build to deliver the nation’s most cost and time-efficient projects.

However, closing our country’s trillion-dollar infrastructure investment gap demands a strong federal partner. America’s design-builders urge Washington to come together, use the strong bipartisan support of the public as the foundation to deliver the infrastructure package our nation desperately needs.” 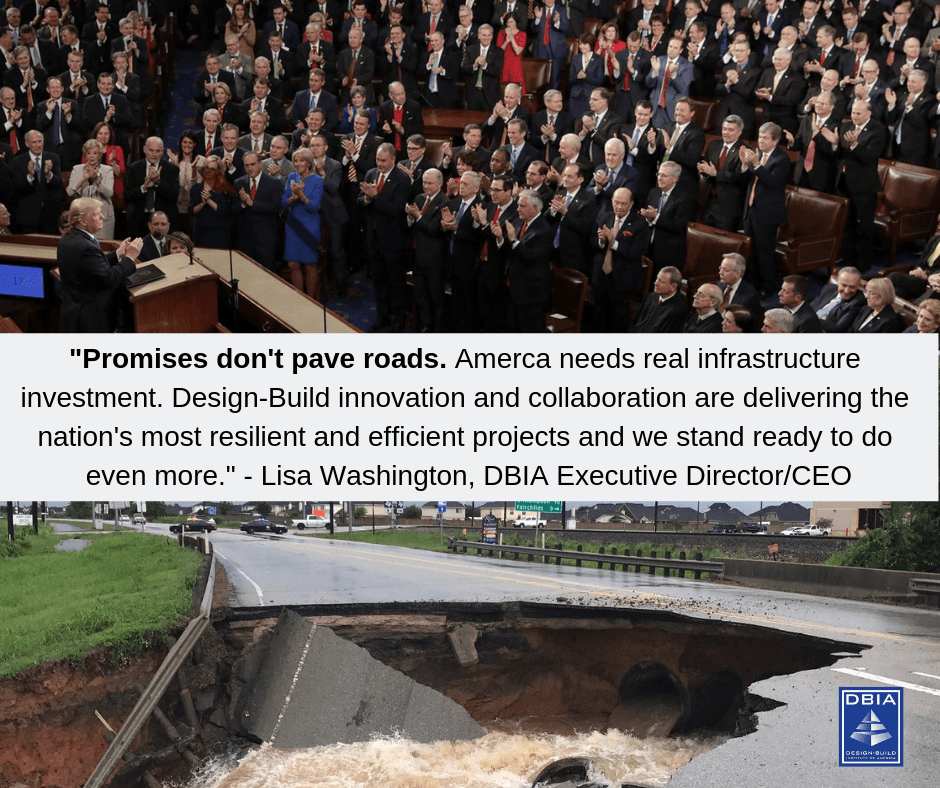