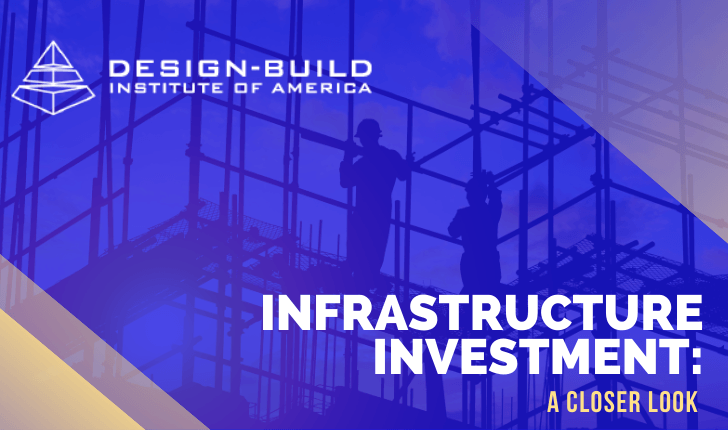 After months of negotiations, the House has passed the $1 trillion infrastructure funding package. The Infrastructure Investment and Jobs Act is a historic investment, no matter how you measure it. In addition to providing the largest infrastructure funding in decades, the bill also shores up the struggling Highway Trust Fund, codifies rules reducing the time it takes federal agencies to issue environmental approvals for major infrastructure projects and provides five-year reauthorizations for highway, transit and U.S. Environmental Protection Agency water programs.

“Passage of infrastructure investment is desperately needed and a long time coming. America’s design-build teams stand ready to, once again just as we did in 2009, roll up our sleeves and get to work building the infrastructure needed to revitalize our economy, communities and nation.” …Lisa Washington, CAE, DBIA Executive Director/CEO

The legislation is far-reaching. ENR describes its key provisions:

“Of the measure’s estimated $1-trillion total, about $550 billion is increased funding over current baseline levels for various infrastructure categories. Highways, bridges and other major transportation projects would receive about $110 billion out of the $550 billion. Passenger and freight rail would get $66 billion, transit would receive $39 billion, airports $25 billion and port and inland waterways projects would get $17 billion.

Water infrastructure, including funds for drinking-water and wastewater-treatment projects, would be allotted $55 billion, and improvements to the electric grid would be allotted $73 billion. The bill also has an emphasis on addressing the effects of climate change, including $46 billion to increase projects’ resilience against storms, wildfires and other natural disasters.

In addition, the IIJA includes $65 billion to expand broadband infrastructure, $65 billion to build resilient electric transmission lines and $7.5 billion to construct  a network of charging stations for electric vehicles.”

The House passed the measure 228-206. Thirteen Republicans, mostly moderates, supported the legislation while six of Democrats’ furthest left members opposed it. President Biden is expected to sign the bill into law this week and says, “Generations from now, people will look back and know this is when America won the economic competition for the 21st Century.”