Infrastructure Investment is the Talk of the Town

It’s been a busy week for those interested in improving America’s infrastructure. The American Society of Civil Engineers’ (ASCE) has released its new Infrastructure Report Card today.  Every four years the group grades the status of nation’s infrastructure. For most Americans it’s no surprise that our nation has received a dismal D+ grade once again. Our nation depends on a strong infrastructure system to thrive and yet we continue fall short in many vital categories, including: roads, transit, aviation and wastewater.

“Today’s ASCE infrastructure report is especially frustrating to the nation’s design-builders who are delivering some of America’s most innovative projects and are ready and able to do so much more in communities desperate for infrastructure improvements.  With much of our nation’s infrastructure either structurally deficient, functionally obsolete or both, what our nation desperately needs is the political will to turn infrastructure promises into real progress.

As Washington considers making a large and overdue investment in our infrastructure, it is important to remember that funding these projects is just the start.  We must also ensure those hard-to-come-by funds are wisely spent. Design-builders know first-hand the importance of cooperation and communication to delivering successful on-time and on-budget projects.  Congress should also embrace that philosophy to craft an aggressive infrastructure improvement plan.”…Lisa Washington, DBIA Executive Director/CEO 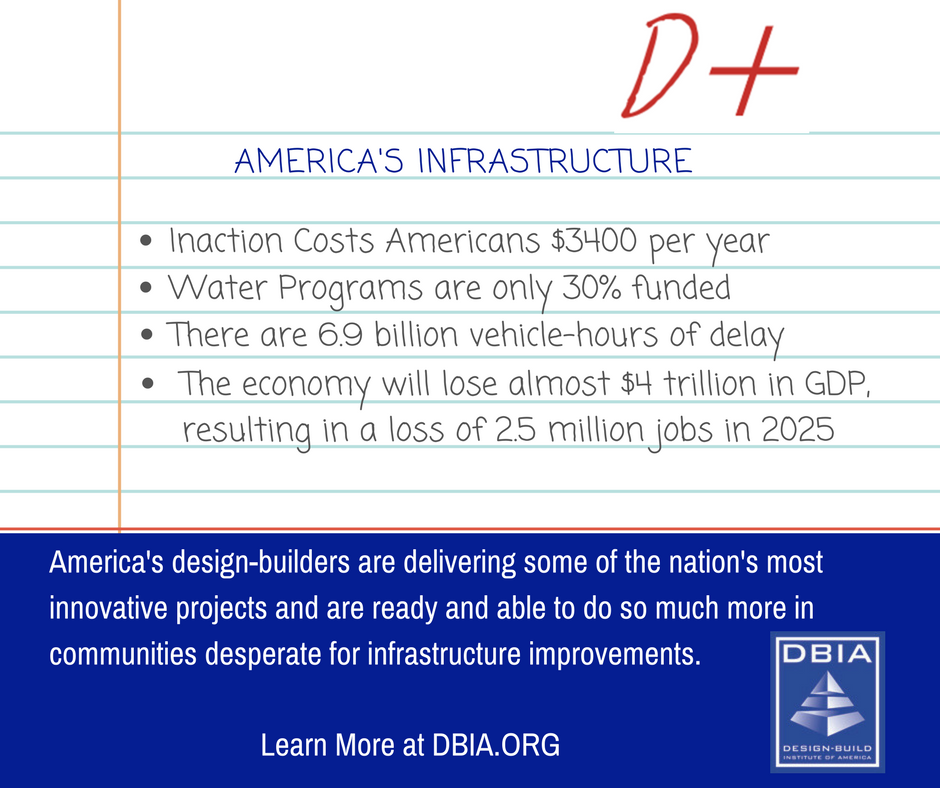 The Design-Build Institute of America (DBIA) is the only organization representing all of the unique specialties involved in creating design-build projects; including, architects, engineers, owners, contractors, manufacturers, financiers and more. As diverse as our membership is they share a common view that revitalizing the nation’s roads, bridges, airports, water systems through increased infrastructure investment will provide lasting economic benefits to Americans from coast to coast. For decades, design-build has been delivering some of the nation’s most successful public projects and should be a part of any national infrastructure strategy.

In Congress, the Senate Appropriations Subcommittee on Transportation, Housing and Urban Development heard from stakeholders about the need for an estimated $4.59 trillion by 2025. As The Hill reports, the challenge is finding that money.

“Some of the options include charging fees based on the number of miles a vehicle travels, increasing existing sales and tires taxes, reallocating revenue from the Harbor Maintenance Trust Fund, and imposing a driver’s license surcharge. “There are pluses and minuses to all these approaches,” said Beth Osborne, senior policy adviser for Transportation for America.

But the funding source was most consistently highlighted was raising the federal gasoline tax or at least indexing it to inflation. Revenue from the gas tax is deposited into the Highway Trust Fund. Raising the tax, which hasn’t been done in over 20 years, is generally considered a nonstarter among Republicans.”

President Trump also met with business leaders and real estate developers, as the administration seeks partnerships with the private sector to boost infrastructure spending. According to Reuters,

“The White House sees infrastructure as a potential large job creator but officials have said the federal government cannot shoulder the entire burden. The administration is looking at toll roads, tax credits and other ways to spur private investment.”

You can learn more about public/private partnerships (P3s) on DBIA’s P3 resource page.  However, while the federal government debates how to pay for infrastructure improvements, many states aren’t waiting for Washington to act. They’re making their own plans.

“Republicans are leading efforts to raises taxes or fees for transportation in Arkansas, Indiana, Oklahoma, South Carolina, Tennessee and Utah, and there are active proposals in at least nine other states to increase revenues. Measures have passed one legislative chamber in Indiana, South Carolina, New Mexico and Utah, and governors are leading or supporting initiatives in 11 states to take care of their own needs.

‘With the federal help, we can do much more than we can on our own, obviously,’ said Alaska Governor Bill Walker, an independent who is seeking to triple his state fuel taxes over two years. ‘But as far as us banking on that, we typically don’t do that just because it’s a risk that we really can’t take at this point.’…Bloomberg News.