DBIA is proud to have supported the 2021 National Institute of Building Sciences Social Equity Survey and appreciate the many DBIA members who took the time to participate as respondents. We believe this work is extremely important.

“Achieving racial equity in the workplace is certain to be one of the most important issues companies will tackle in the coming decade, making it one of many ‘disruptors’ for DBIA, our members and our industry. Business as usual is not an option. Research like this NIBS survey provides the data we need to make informed decisions as we plot a social equity course providing fair and equal treatment regardless of our differences.”  — Lisa Washington, CAE, DBIA Executive Director/CEO

Respondents fairly represent the AEC industry overall, older, white and male with decades of experience in the built-environment. 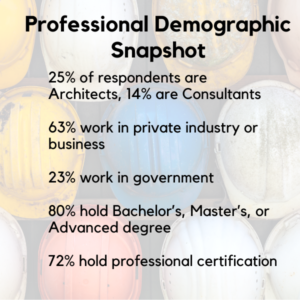 We recommend you read the full report but here are some key takeaways:

Differences in the Perception of Diversity

That’s reflected in responses that show nearly half (43%) of employed/working respondents say their company now has a program or initiative dedicated to DEI.

Overall, 60% of respondents report they have faced discrimination or prejudice in the workplace with age (28%), gender (27%) and race and/or ethnicity (16%) the most commonly reported. 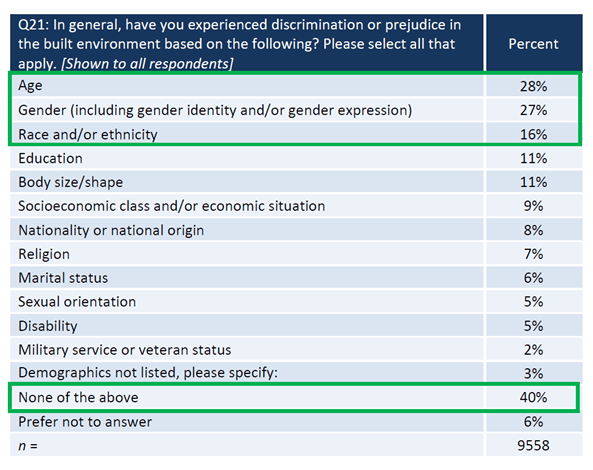 The NIBS Social Equity Survey provides an important snapshot of our industry and perspectives on diversity in the workplace. DBIA is committed to continue our important work as part of our Differing Sight Conditions campaign to engage in “less talk” and “more action” to find solutions to the core issue of racial bias in the AEC industry.