;
« It’s All Greek to Me
Design-Build Best Practices: A Conversation with Michael Loulakis and Diana Hoag »

The Readiness Center was Oregon’s first to be designed and built using strict design excellence guidelines that were modeled after the U.S. General Services Administration’s design excellence program. Its design excellence is expressed through its timelessness, connection to its site, its human scale and the structural and material integrity. The Center was designed to evoke images of historic grange halls in the Willamette Valley while maintaining the necessary requirements of the military.

The building takes advantage of the natural beauty of the surrounding landscape; the approach goes through grasslands and orchards and over a stream, providing setbacks and separation for security in the most aesthetic manner possible. The assembly hall provides panoramic views of the land and its interior, with natural light filtering through a natural wood framework establishes a connection with the land. A large gabion wall separates the military vehicle zone from public parking.

A major design challenge was balancing the requirements for stringent security with the desire for excellent design. While this was far from easy, the team of Lease Crutcher Lewis and THA Architecture accomplished it superbly. Form and function are seamlessly allied, with separate secure program areas for administrative spaces and training facilities, separated by the public areas, which are welcoming and less stringently secured.

In the owner letter in the award submission, the Oregon Military Department called the Center “the best National Guard Readiness Center in the nation.” They cite design-build as providing numerous benefits from their – the owner’s – perspective, including the collaborative approach of the team, design flexibility, the decrease in the owner’s risk while increasing the project’s value to the owner. 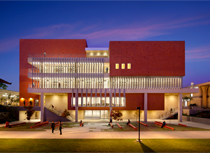 The design of the new Contemporary Arts Center at the University of California, Irvine was a challenge in many ways. The Center provides space for a range of purposes – instruction, research, performance, production support and office space – for several art forms. each of which has its own requirements, all in a tightly constrained space. And, in the middle of the RFP phase, the University expressed a desire that the building be as sustainable as possible, sending the design-builder “back to the drawing board” as they say.

Reducing the Center’s carbon footprint required them to consider which departments’ needs could be met in innovative ways. Some spaces – the theater, gallery and sound design lab among them – did actually require climate and noise controls. Others, such as offices, studios and corridors, were less demanding in that respect. The design-builder met the challenge by organizing these spaces by their actual requirements; those that did require the energy-intensive controls were set in the interior section of the building; those that did not, and might benefit from access to natural light and ventilation, were placed around the exterior of the building. And corridors served as buffer zones separating the two. On the top floor, artists’ studios and terraces provide true indoor-outdoor spaces, taking advantage of both the views and the Southern California climate. Indeed, the terraces are being used as outdoor studio/workshops, lounges, impromptu exhibition spaces and lounges, promoting creative collaboration among students and faculty.

The Center has become a lively work of functional art, enhancing the campus and promising long-term benefits for the entire University community. 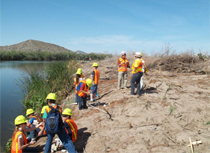 The Tres Rios Environmental Restoration project addressed flood control, river and habitat restoration and regulatory issues related to effluent discharge into the Salt River from a wastewater treatment plant. In 2000, Congress approved the project for the U.S. Army Corps of Engineers Los Angeles District. One of the requirements of the project was to preserve and protect any remaining native wetland/marsh ecosystem and create the opportunity for damaged ecosystems to return, as much as possible, to their original states.

The project succeeded, creating 44 acres of new, open-water reaches, along with 10 acres of marshland and 46 acres of improved riparian habitat. Tres Rios is not only four times the size of the average wetland ecosystem restoration project, but the care required to clear the invasive species, excavate large amounts of earth and reinstate native plants increased the level of the project.

In addition to the improved habitat, the project provides improved flood control and new and improved habitat for native birds, including bald eagles. It is also working on a six-year effort to eradicate the invasive Tamarisk (Salt Cedar) as part of bringing the ecosystem closer to its original state. And human inhabitants also benefit from the project – not only is the flood danger reduced, but the new open water areas provide recreational areas, and the Tres Rio Nature and Earth Festival has, after two years, been able to return to its original site.

One of the innovations used to achieve the project’s success was the use of 3D modeling, allowing all those involved – designers, contractors, owner and other stakeholders – to see the status and collaborate on necessary changes. Indeed, one of the outstanding elements of the project was the inclusion of all those involved, and affected, in the planning.